We define alGOVrithms as automated selection or filtering processes, used by the government authorities in decision-making, whose output directly influences the citizens’ well-being. According to the definition contained in the online version of the Oxford dictionary, it is a process or a set of rules to be followed in calculations or other problem-solving operations, especially by a computer. David Harel[1] compares an algorithm with a cooking recipe. While components are output data, and a finished dish is the result, many activities such as selecting appropriate proportions at the right time or applied methods of thermal processing, etc. are just an algorithm. From the life experience one can easily deduce that one mistake at the stage of preparing a dish can lead to failure in its taste and appearance.

In the short run we would like to have a clear picture on the use of algorithms in the participating countries and understand how policy makers relate to the issue. Furthermore, we want to compare legislation and practices in the V4+ Region to some of those countries that are more advanced (France and USA) in using algorithms in public administration.

Thanks to the project, we will be able to identify examples of algorithms used by public administration, describe how they work, verify whether they are introduced through legal regulations, check how open and transparent they are and see if there is any system in place that secures citizens’ rights against abuses committed by algorithms.

Through fostering debate among stakeholders from academia, government and civil society (by press materials, consultations involving selected CSOs and press conference concluding the project’s findings), we would like to drive professional and public attention to the topic and encourage policymakers to understand the importance and the potential of algorithms in public administration. We firmly believe that this initiative will also lead to further research and concrete necessary legislative steps on the issue.

This project also aims to establish regional community among the topic experts in the V4 area and to communicate the role and importance of algorithms to citizens.

K-Monitor is an anti-corruption grass root NGO founded in 2007, based in Budapest, Hungary. K-Monitor strives against corruption and promotes the transparency of public spending in the country. It develops civic tech services, conducts research and advocates for reform both on the national and local level. With its researches, analyses and recommendations, K-Monitor aims to challenge and overcome the social indifference to corruption, to raise awareness and encourage participation. TransparenCEE network member.

KohoVolit.eu was founded in 2009 with the aim of helping to improve democracy using the new technological tools. Since then we have participated in more than ten projects, together with international partners around the world, such as the National Democratic Institute from the US, Fundacja ePaństwo from Poland, K-Monitor from Hungary, Transparency International Ukraine and JumpStart Georgia. It provides the independent voice and expertise into cooperation with the government and the parliament (e.g., on opening data).

Slovak NGO KohoVolit.eu was founded in 2010. Its core target is to help democracy using the new technologies, using them on in civic education projects and others. Its most successful projects had around half a million of users. It took part in several international projects aiming on opening data, standardization and the new technology in general. It is one of only a few NGOs in Slovakia who are actively dealing with the current trends arising from the IT revolution, algorithmization among them.

With long experience and know how in facilitating the engagement of diverse stakeholders in a joint effort to influence responsive and inclusive decision making, CRTA has established the credibility and recognition as a reliable partner to civil society, academia and public institutions interested to foster civic participation, openness and accountability. Since 2009, CRTA’s focuses on the establishment of innovative and practical mechanisms for citizens’ engagement in advocacy for an open, accountable and inclusive government. 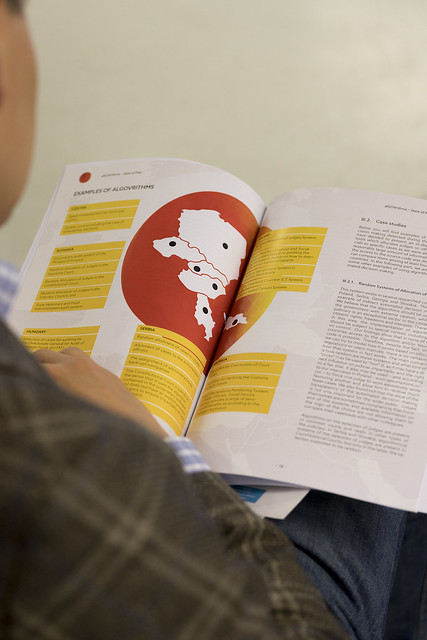 From the perspective of our concerns regarding the human (rights)-centered approach, the European Commission’s proposal on AI regulation is in […]

In Solidarity with Ivan Pavlov

We, the undersigned organisations and individuals, express our solidarity with Ivan Pavlov, a Russian human rights activist and lawyer, who […]

In the previous article, we wrote about the EU Database of High-risks AI systems. We appreciated the idea but pointed […]

In this series of texts, we will concentrate shortly on selected provisions of the proposal, as due to their importance […]

Here it is! A long-awaited proposal on Artificial Intelligence regulation was officially presented by the European Commission. We had an […]

alGOVrithms 2.0: The State Of Play

The second edition of “alGOVrithms. The State of Play” is taking an in-depthlook at the usage of Automated Decision Making […]

"Policy" activities focus on influencing the practice of public administration, shaping the case law and initiating action to change the law.